Confession – I totally fell for the marketing ploy on this one.   I was at Whole Foods and saw that the tasting notes on the bottle said “great value!!!” and the bottle was only $7.99.   Less than the block of cheese I bought, woohoo!

Sniff… cherries, raspberries, flower petals and white pepper.   Tart berries on the midpalate, lots of bright acidity in this wine.   The finish was light and a bit spicy with sour raspberry lingering.   My palate tends to gravitate towards wines that are more robust unless we’re talking about Pinots or certain white wines, but I can appreciate this <$8 wine  - lotsa bite that would pair well with cheeses.   Many wines that are in the same price range are way too fruit forward and don’t have any structure.   Great everyday drinking wine!

This is my first official post on my very own domain – www.grapedeals.com!

My site officially went live today, so I had to blog a new wine.   If this font and format look funny, it is because I am still learning!

I had heard that a new local store Sprouts has a pretty nice selection of wines under $20 so I had to check it out.   Those who are fans of the wine selection at Trader Joe’s will like Sprouts too, in fact… I don’t think they carried one bottle over $20.   The Mouton Cadet is a Bordeaux blend I picked up for 12 bucks.   As soon as I opened the bottle, I knew this one was young and could use more time in the bottle.   But tonight, I was just hoping that some time in the glass would help, and it did.   Black cherries, dirt, and flower petals on the nose – mostly black cherry though.   The mouthfeel lives up to the nose, and is pretty huge – definitely similar to biting into a ripe black cherry… without the pit!   Lots of grip on the finish, which reaffirmed my initial belief that this wine could use more time in the bottle.

I had to pair this one with food because I rarely drink French or Italian wines on their own.   I experimented a bit tonight – sauteed shiitake/oyster/crimini/button mushrooms in a bit of butter and then mixed in some camembert and gorgonzola cheese until the cheeses melted.   The wine was great with the mushrooms and cheese! 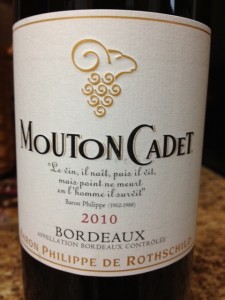